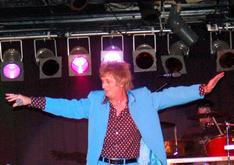 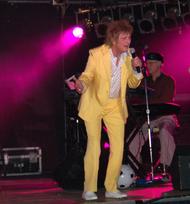 After two years, Larry decided to do a larger production and brought in a band. "I wanted to do a show just like you would see at a Rod Stewart show." His attention to detail is exact, even down to his stage outfits. "It was really hard finding clothes. I would go to Vegas and buy things, but it just wasn't right. Then I finally found this lady who could authentically make them, including the yellow suit from the Vagabond  tour and just recently, a zebra striped jacked with satin lapels..

With all the attention to the aesthetic details, the big question is, what about the sound!?! Larry nails Stewart's trademark rasp and his in-between- the songs banter is definitely reminiscent of the original. INFATUATION, the  ban d  tha t  provides  the musical muscle, is chock full of seasoned profes­sionals intent on preserving the spirit of the show,

Infatuation: Larry Maglinger's Tribute to 30 years of Rod Stewart consists of songs from the earliest to the recent, including Rod's successful foray into standards such as What a Wonderful World and Moonglow. With over sixty songs in his repertoire, Larry can please the most diehard fan, playing the hits as well as the more obscure album cuts. Gems like Handbags and Gladrags, Gasoline Alley to For­ever Young and We're Havin' a Party. Larry truly in­vokes the spirit of the Scottish crooner, and for two hours a night, in essence, becomes Rod Stewart.

Rod Stewart has made a career out of never being dull. From his Young Turk days with songs like Stay With Me, and Hot Legs to his current hit-making streak of re-creating standards, it seems as though Rod the Mod will remain Forever Young

And as Rod has achieved the status of legend, his public performances have dwindled in number limiting the amount of cities and, ultimately, the number of people that can experience the excitement of a Rod Stewart concert.

Known for being the BBQ Capital of the world, Owensboro, Kentucky is not a likely stop for the next Rod the Mod extravaganza. However, those in need of their Maggie May fix should look no further than their own backyard. Owensboro na­tive, Larry Maglinger has been entertaining fans for over ten years with his tribute to Rod Stewart. While tribute acts have been around for years, El­vis being the most prevalent, Rod's voice has such a raspy quality and nuances that (in this respect like Elvis) make it uniquely his. When you hear Larry's performance, you are hearing Rod; you're seeing Rod with the style and the moves, and with his trademark spiky rooster hairstyle.

.
Starting at the age of fifteen and lasting six years, Larry performed with a group called the Mags which he left to become a recording engineer in Madisonville, Kentucky at Electric Arts Studios owned by famed Gospel Music stars, the Happy Goodman. After four years and 250 projects, Larry was offered a position at Nashville's Wood­land Sound Studios, where he was at the controls for such diverse projects as Reba McEntire's ma­jor label debut, Cajun Jo-el Sonnier, a Kellogg's commercial featuring Tammy Wynette (she was fighting with her then husband George Jones) and Jimmy Buffett.

Armed with his experience in the recording in­dustry, Larry returned to Owensboro and formed Custom Audio-Video, Inc; designing and maintain­ing some of the most complex communication and video systems. After maintaining his business for 30 plus years, Larry felt the itch to return to music. It was fate that steered him to performing Rod. "I was out singing to tracks (backing tracks) and I have a raspy rough voice; someone came up to me and said, 'you sound like Rod Stewart. You should do some of his songs.' So I really did my home­work, went to see a lot of Rod concerts; watched concert footage spanning his career. Then I found a company in England that would make the back­ing tracks for the songs I wanted to perform, so they would record them almost identical to the original minus the voice.